It’s been over six months since all 440 million of the shiny new £5 notes went into circulation – and what a journey it’s been. It seems that this marginally small denomination is the gift that just keeps on giving, with rare features transforming your average fiver into millions of pounds.

Local Brits have never ever studied a piece of polymer quite so hard! So let’s take a look at this note in detail, to discover why it’s such a great idea and how it’s printed:

When did the new £5 note come out?

On September 13th 2016, Britain took its first step towards polymer bank notes and their use as everyday currency. When the 5th May 2017 comes around, the old paper variety will cease to be legal tender and can only be exchanged at your bank or building society. 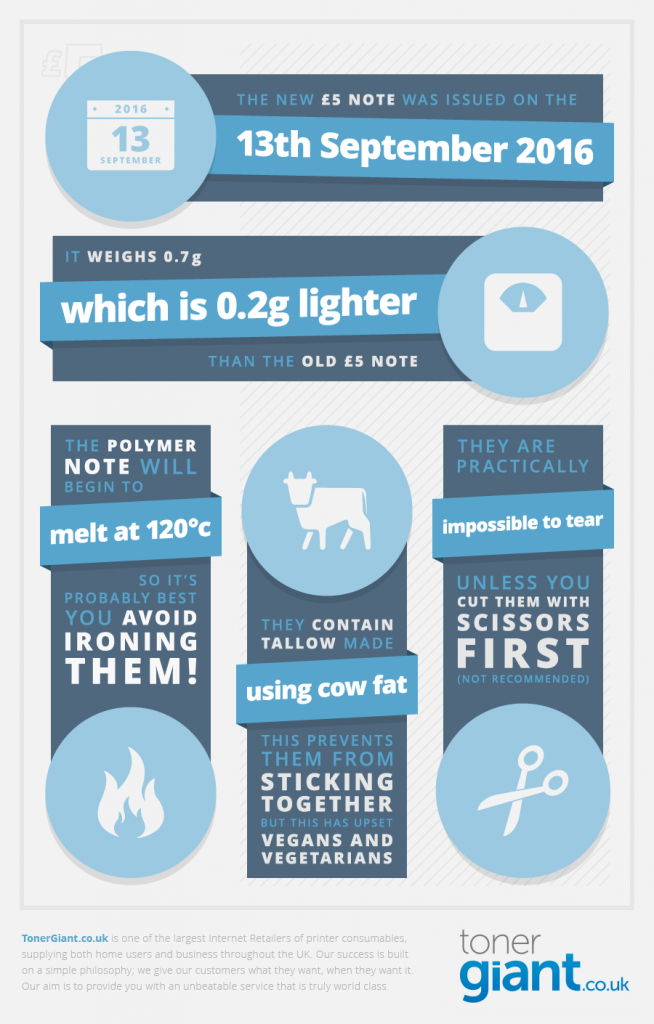 The notes are made using a transparent plastic film, with a special coated ink layer that carries the design of the notes. Lithographic printing is the technique used to create the new £5 notes, this is a dry offset printing process used to apply ink to the polymer substrate.

The silver foil patch at the bottom of the tower has a hologram of the word ‘Five’ changing to the word ‘Pounds’ and under UV light, the number 5 appears in bright red and green colours. If you shine a laser through the Queen’s neck (on the new fiver) you will also create a field of stars on the wall behind.

Controversy around the note

All good things come with a price. Vegans and Vegetarians were outraged when the discovery was made that the new £5 note contains tallow, an animal-derived product. However, The Bank of England announced that they intend to keep the production of £5 notes with the tallow and will be using the same recipe for the highly anticipated new £10 note. 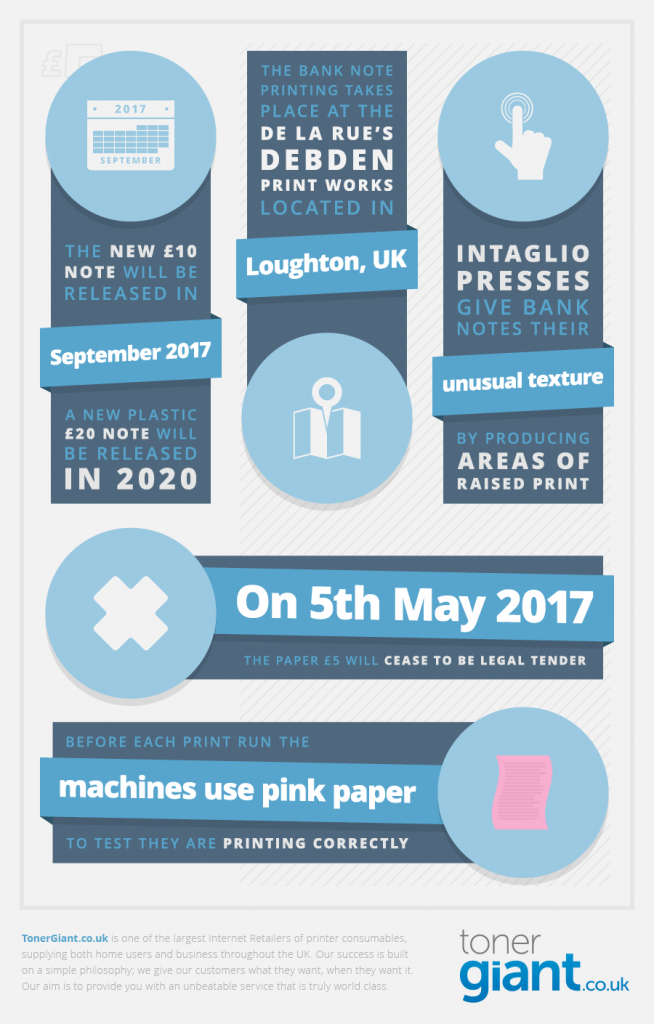 If you think the shinier, stronger and cleaner £5 note isn’t needed, the stats say otherwise. In 2016 alone, 10,471 notes were claimed as torn, 5,094 chewed or eaten, 1,809 unfortunate notes went through the washing machine, 2,565 were lost to contamination and 1,238 went missing in floods and fires. That amounts to £13,863 bank notes lost, due to their weak material properties.

Despite contactless technology, smartphone apps and mobile ‘wallets’ popularity, cash continues to be important in the UK. Demand for Bank of England notes is growing faster than normal GDP. There is now the equivalent of around £1,000 in banknotes in circulation for each person in the United Kingdom.

Who is on the new fivers?

The £5 notes feature Sir Winston Churchill, replacing the former face of Elizabeth Fry. Commenting on the choice, the Governor said: “Our banknotes acknowledge the life and work of great Britons. Sir Winston Churchill was a truly great British leader, orator and writer. Above that, he remains a hero of the entire free world. His energy, courage, eloquence, wit and public service are an inspiration to us all.”

You can also see a background image of the Nobel Prize medal that Sir Winston Churchill was awarded in 1953 for literature, together with the wording of the prize citation.

Do other countries use polymer?

Yes! Over 30 countries currently issue polymer notes. These include Australia (who introduced them in 1988), New Zealand, Mexico, Singapore, Canada and Fiji…it seems we’re a little behind the times. 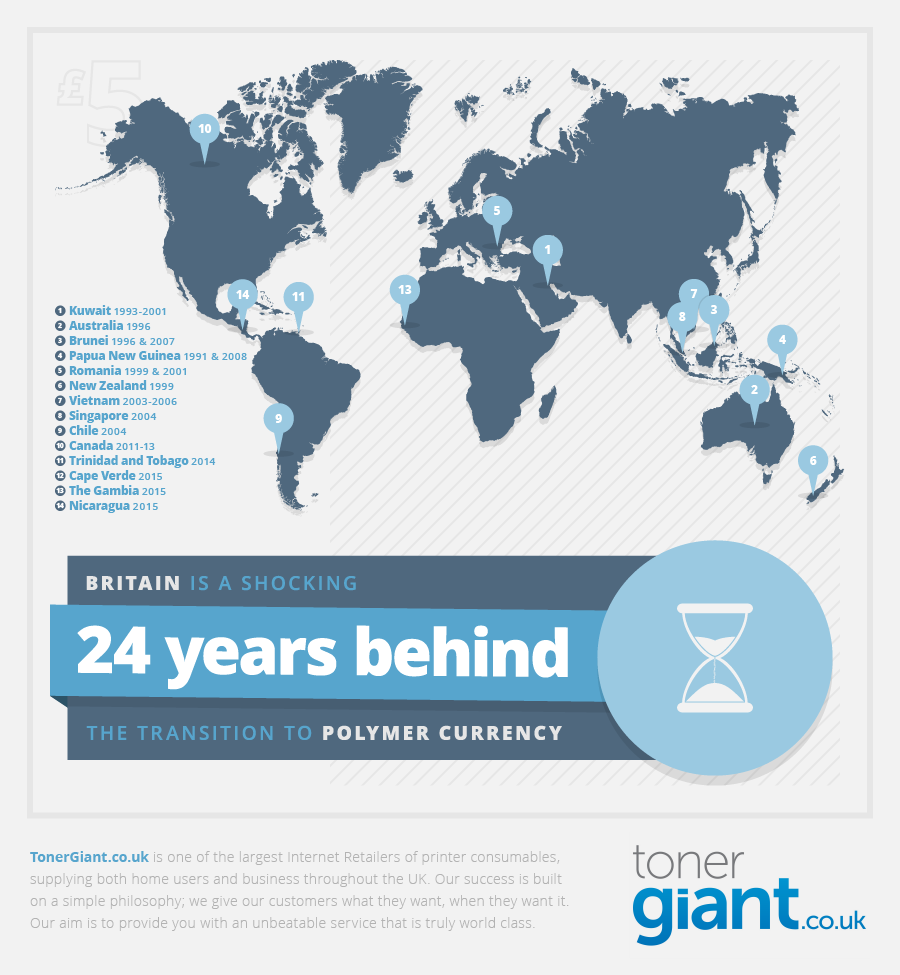 How are the polymer £5 notes manufactured?

The polymer sheets, created in Innovia, Australia first and shipped over, have the see-through windows on them and are ready for printing. The note imagery is then printed on both sides and the sheets are fed one by one into a foiling machine and the foils are applied from a tape onto the note.

The Queen’s portrait is then added to the note and then they are UV treated on both sides to prevent them from fading. The machine counts the sheets of notes and a man-powered guillotine cuts the sheets into individual notes. Stacks of notes are loaded and then individually checked by running over 200 different tests. The final notes are packaged up and locked in a cage ready to be stored in the vaults.

The latest myth involves the batch with the AA01 serial code, and this is because they are considered to be some of the ‘first-born fivers’, with Brits who now come under the term ‘collectors’ paying over £200 for the original masterpieces. There are a couple of special notes out there too. A £5 note engraved with a tiny portrait of Jane Austen is said to have been worth up to £50,000. If you’re wondering “How much is my £5 note worth?’ then take a look at this article which lists all of the priceless notes in circulation. 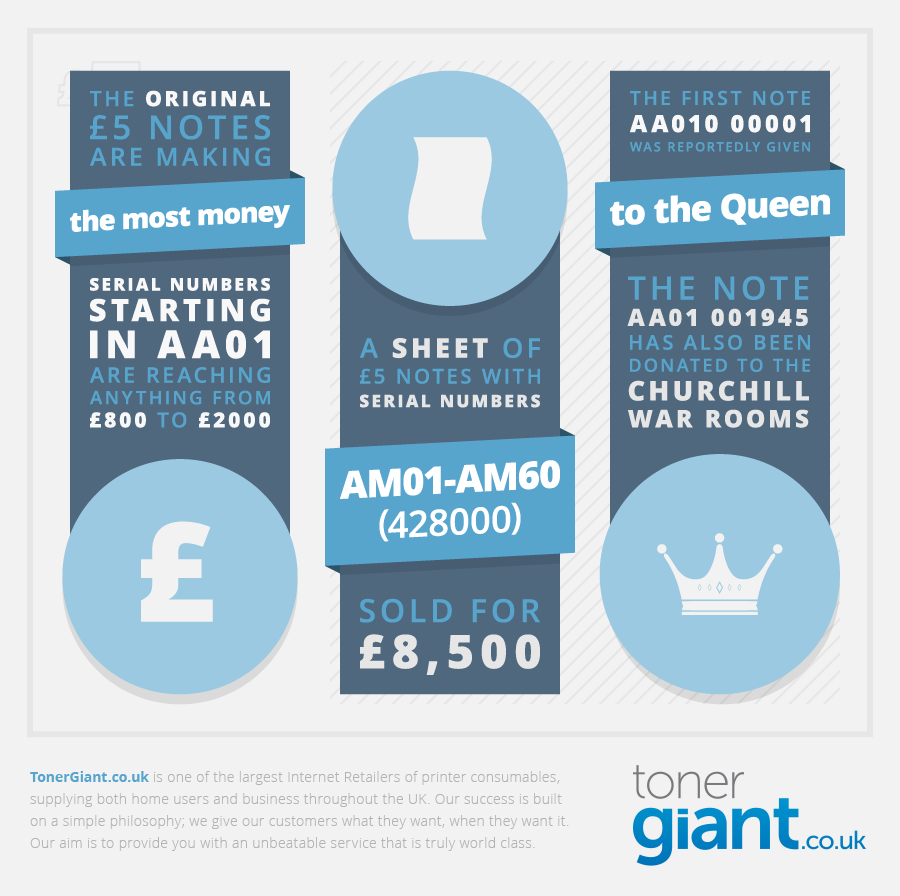 The new £10 note will be released in 2017 with a £20 note in hot pursuit planned for 2020 and will feature Jane Austen. Production has already begun, with 275 million notes already printed since August 2016.

I have been working in the printing industry with TonerGiant for over 12 years and am the resident technical printer expert. I'm also the Digital Marketing Manager at TonerGiant.co.uk (degree qualified) and I have a passion for helping people fix their printer issues. I'm also a big fan of all gadgets and technology.

This site uses Akismet to reduce spam. Learn how your comment data is processed.